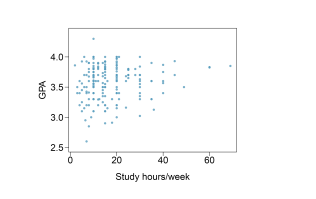 a) What is the explanatory variable and what is the response variable?

b) Describe the relationship between the two variables. Make sure to discuss unusual observations, if any.

There seems to be a positive association, that is, that the more study hours, the higher the GPA.

Some unusual observations are: there is a person with a GPA above 4, but 4 should be the limit.

There are two people that claimed to study more than 60 hours per week.

c) Is this an experiment or an observational study?

It is an observational study

d) Can we conclude that studying longer hours leads to higher GPAs?

We can’t because it is an observational study, we can just point to an association (or correlation).