Setting up your Computer

It is important to know that the JVM is the reason that Java is a platform-independent language. This is because when you write Java code or program, it's ultimately written for JVM and not the physical computer or device you're using. However, it is equally important to know that JVM also depends on the Operating System (OS) of your device for core java functions like memory management, garbage collection, security, etc.

Javac stands for Java compiler. It is the tool that can transform Java programming code to the Java bytecode.

JAR is an Abbreviation for Java Archive. It is a ZIP file, which contains compiled Java code(s), and in some cases also contains the source codes of Java programs and applications.

As it is a ZIP file, file elements may be compressed, shortening download times. A JAR file allows Java runtimes to efficiently deploy an entire application, including its classes and their associated resources, in a single request.

What are Java libraries?

A Java library is a set of Java classes that are generally organized and packaged in some coherent manner to promote reuse.

The image below may help you understand the difference between JDK, JRE, JVM, and other Java Components. 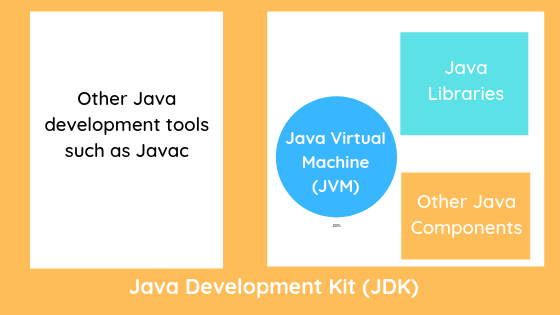 Find out about other components used in Java programming language.